So, um, why exactly? 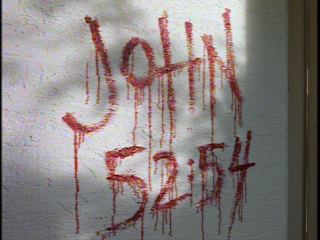 I am the living bread which came down out of heaven: if any man eat of this bread, he shall live for ever: yea and the bread which I will give is my flesh, for the life of the world. (John 52:54)

Well, it's John 52:54 if you believe the writers of the X-Files. In reality, it's John 6:51. American Standard Version for anyone keeping score. (Update....the Scripture quoted the episode is actually John 6:54 -- I thought I had checked that, but apparently not. I believe he quotes is correctly from the KJV).

OK, so this is a bit odd to be blogging about. Some background information. The Scripture and quoted "reference" are from a second season episode of the X-Files called "3". The basic premise of it is, there are a group of supposed "vampires" in LA (big surprise there, crazy Californians), and, taking Christ's words completely and illogically out of context, they believe that, by going around drinking the blood of other people, they will gain immortality. After one such attack (the first in 3 years, if I recall correctly), Mulder comes to the house to investigate. There, written in blood on the wall, is "John 52:54". Mulder then goes on to quote (paraphrase is the better word, as it's not exact. Or not exact to any of the translations I'm aware of) the "referenced" Scripture, followed by the line (or close facsimile thereof), "they have the same feeble literal grasp of the Bible that all those big-haired preachers do".

So, I recognize that the episode originally aired ~12 years ago, but I'm just now watching the X-Files in its entirety on DVD. As I was watching it, the image at the top of the page interested me. At first I didn't know quite what to make of it. There are only 21 chapters in John, so it jumped out at me as odd. Was that supposed to be a Scripture reference? As mentioned, Mulder went on to "quote" the Scripture, which led me to know that yes, this was supposed to be a Scripture reference.

So my next question is....why? The X-Files, like so many other shows have been known to use fake telephone numbers (the '555' prefix has become somewhat of a joke to many nowadays it's become so cliche`). They've also been known to use fake cities/locations in their episodes. Neither of those things I can fault them. But, I really don't understand why they would use something like "John 52:54" as the reference for a very existent verse. If you're going to quote the Scripture, you should at least get the book, chapter, and verse correct. I don't know why 1) they would falsify it and 2) they would falsify it so blatantly. If you're looking for a non-existent chapter of John, why not John 22? Why choose 52? That seems a little extreme. But, I still question the reason behind choosing a fake chapter at all.

I don't know. I've got a copy of the most excellent book "Nitpicker's Guide for X-Philes" at home and hope to look into it as soon as I get a chance. It just seems really odd to me.
Posted by Brian at 10:21 PM