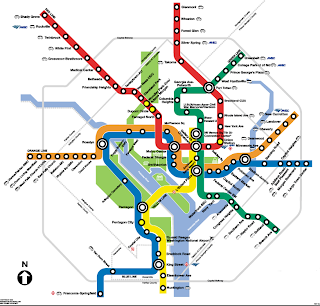 So, to my left (/me does Vanna pose) is a map of the DC Metro system, painstakingly made by yours truly and modified (I REALLY wanted to do this using maps.google.com, but didn't really have the time or the over whelming motivation to figure out the API and javascript that would be involved. OK, time I technicallly have. That darn motivation, however....). So anyway, I've taken this image and done some modifications. If you can actually see the image (while I type this, it looks VERY small), there are 4 stations that have a yellow dot surrounded by a black circle (like this:

Those are the places that I've been so far (on the Metro at least, although I haven't strayed far from the vein). I probably could've been fancier, but again, didn't really want to put in the time it would take. Sooooo, anyway.....

I'd really like to figure out how to mark things in Google Maps and may yet. But, I thought this would be interesting to the folks back home.