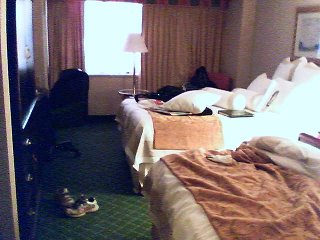 This is my hotel room, in all its cluttered glory!

I didn't get to take any pictures last night, which saddened me. The day was spent in "Over the Edge System Administration", which was a GREAT class. The guy who spoke is a prof at NorthEastern College/University and was just an excellent speaker. He told us about ways to "think outside the box" -- a little cliche, but basically taking tools that are familiar to sysadmins and using them in new ways (he started out by using the lpr program, which is used for printing, and using that to play music!).

Decided to try to meet some folks at the conference for dinner, so I arranged a "real life" meeting with some folks from the LISA '06 irc channel. Mom told me I shouldn't be anti-social, which is slowly what I'm becoming, so I decided to try to meet some folks. So, at 5:30, after the class (and we could go back to our respective rooms), we met in the lobby by the big Christmas tree (pictures of that to come). Four of us decided to go out for sushi.

Now, I'll readily admit, I've eaten and enjoyed sushi. But, the extent of my sushi experience is what I could pick up in the hospital cafeteria/grocery store. I've never gone out for sushi. So, it intrigued me (by the way, to dispel common myth, very little sushi is raw....). And off we went.

We got to what looked like a little hole in the wall and went inside. Inside, however, was far different than what the outside portrayed. It was probably one of the fanciest restaurants I've ever been to! Because we didn't have a reservation, we sat traditional Japanese style, shoe's off and on the floor! I was sooooo embarassed! I covered my legs with my jacket for fear that my feet would not smell pleasant.

The group I was with decided to get a communal plate and share it, so we got a large platter to share. Among them was tuna, seered salmon, shrimp, california rolls, squid, eel, and salmon roe. It was all VERY good, and I was adventurous and tried everything, including the roe!

The trip for sushi ended up taking longer than I'd hoped, which was fine as it was good to actually hang out with people. The beer and ice cream social was b/t 7 and 9, and we just barely missed it. Which is fine by me, because I didn't want the beer, and really didn't need the ice cream. Ended up spending the rest of the evening in the terminal room with one of the people I went to dinner with, and a student from NorthEastern University. Had a good talk.....

And then, as the night went on, I noticed my tummy wasn't feeling very good. The sushi that I had enjoyed earlier apparently didn't agree with me and my stomach was feeling quite upset. The room closed at 2am, and I would've enjoyed staying till then, but about 12:30 I had to go back to the room. Ended up brushing my teeth and going to bed in the hopes the pain would go away. Slept soundly till the alarm went off this morning.

Fortunately, I ended up feeling fine this morning. I'm not a big seafood fan, and I just believe that something I ate just didn't agree with my stomach (though you can't be too careful when dealing with seafood). I talked with one of the folks I went with and he didn't mention feeling ill, so I really just think it was me. As I mentioned, I woke up this morning and felt fine.

Took a walk this morning down to OpenCity for breakfast. I've enjoyed my meals there. I'm bothered that I've had eggs everyday this week so far, and they only recommend 3 eggs a week (I think). But, if I don't get eggs, my only other option is some pastry, which I really want to avoid. So this morning it was two poached eggs, light/easy, with wheat toast and cottage cheese. Very good. Read out of Acts while I was waiting on the food. Ate, and came back to the hotel for the keynote speaker.

I'm going to go ahead and publish this and will add more after lunch.

OK, so it's after lunch now. I've had a good morning. The keynote speaker was OK, nothing too terribly earthshattering. He spoke about how, essentially, the big corporations are slowly eroding our rights as consumers. How they're becoming more and more restrictive with what we can do with things we buy and how it doesn't take much for us to accept those pesky "end user agreements" that big corporations are fond of. I won't bore you with what I think on the matter, but I'm not one of those people who believe we should be able to do whatever we want with music/movies/entertainment we purchase. I don't believe we have the right to take that media and distribute it to whomever we wish. And I do not believe that we have some sort of right to free music/movies just because the media cartel is a bunch of crooks and thugs (and I do believe the latter part, but regardless, that doesn't give me the right to break the law). What I DO have a problem with is that, legally, I cannot take a movie that I bought on DVD and play it on my Linux laptop. That's wrong. If I bought it, I should be able to play it on whatever device I wish. But because of copy protection, your normal dvd players and software shipped with Windows and Macs are able to play because those people have paid a licensing fee so that they can decode the protection on the dvds. Because there is no licensed DVD software for Linux, to play the DVD on my laptop violates the DMCA, and is therefore illegal. Despite the fact that I bought the disc, and I'm just viewing it for myself. I'm not making copies and distributing it to every Tom, Dick, and Harry that comes along. So, that calls into question, "if it's a stupid law, is it justifiable to break it?" I'll leave that as an exercise for the reader (obviously, the answer is 'no'....the law is the law....).

OK, I know I said I wouldn't bore you, and I have. But, it is an important issue that has far-reaching effects....the only thing the MPAA and RIAA are interested in is money, and they will do whatever they can get away with to get it. OK, I'll stop.

After the keynote, it was snack time. They had bagels and coffee. Having already eaten breakfast, I opted out of the bagel, but desperately needed the coffee. Grabbed that and headed to the terminal room. Hung out in here till 12, when the vendor exhibition opened. And, with vendor exhibitions comes free stuff! The thing is, I don't like just walking around like a vulture and gobbling up free stuff. Because if you swoop in for the free stuff, the vendors want to talk to you. And sadly, what the vendors have I don't do much with. But I did get to talk to some folks from GoogleTM which was cool. Google is a great company and, I have to admit, I would love to work there. But I enjoy both of my current jobs and I'm not eager to move anywhere anytime soon. Saw a couple of other products that does pertain to my job and take back to the folks at University. Got a free hat and shirt! Oh, and a Google yo-yo!

After making my way through the vendor space, I went to lunch. It was OpenCity again :) . Their caesar salad and vegetable chili was the first meal I had when I got here Sunday, and it was really good. So I repeated that. And it was just as good.

At 2, we had "Tech Sessions". My first one was listening to a GoogleTM employee talk about his first months at GoogleTM. Learned a lot of good stuff about GoogleTM and it was PACKED!

(Did I mention, GoogleTM that I love you and want to come work for you????)

Nothing much to report there, got done, had our snack. I think I took the last cookie. Which really made me sad when I realized that break time was really 3:30 - 4, and it was only 3:10, and the other sessions hadn't let out yet :( But, I didn't know that at the time, and if I didn't take it, the one behind me would. I feel justified! And it was a peanut butter cookie too! :)

And that brings us to where we are now. Virtualization: The Good, The Bad, And The Ugly. How about, "The Boring"? The speaker kind of reminds me of Richard Dreyfuss. And I think there are people using virtual servers in far different and complex ways than I do.

Not sure what I'm going to do after this. I want to do some of the conferencey things they have, but by the same token, I want to take advantage of my time in DC and look around. I may hang out at the hotel tonight, probably just doing laptop things. There's a "Carnival" tomorrow night which I want to go to.
Posted by Brian at 7:18 AM

Don't tell me stories of about an upset "tummy" unless there is throwing-up or some way-off-rushing-like-a-mad-man-to-drop-the-deuce funny thing involved! Upset tummies never should be reported unless done so with humor!