A Trip to Narnia

When I was in elementary school, perhaps as early as 3rd grade, I remember reading a few of the books in The Chronicle of Narnia series by C.S. Lewis. Most notably were The Magician's Nephew and The Lion, the Witch, and the Wardrobe. Several years ago, knowing that I enjoy reading Lewis and the Narnia books in particular, Wife bought me all 7 books in a set. I remember sitting down and anxiously rereading them, as if I was in elementary school all over again.

In December of 2005, while away on my first trip to San Diego, I watched the then newly released The Lion, the Witch, and the Wardrobe. It was incredible and I loved it. Tonight I got a chance to watch its sequel, Prince Caspian. I don't know how I'd compare it to the first, but I do know this -- it was incredible and I loved it. It had a darker feel to it, which I liked, and I liked that all 4 children were back. I thought they did a fantastic job and enjoyed the tension between several of the characters. Liam Neeson reprieved his role as Aslan and thought he did well, but was saddened to hear that, to him, Aslan was more representative of "the spirit of the planet" and "more what the Native Americans would believe" than a Christ figure. Obviously he's free to take away from it what he wants, but for whatever reason that bugs me. While it can be debated whether the parallel is intentional on Lewis' part or not, the parallel is there nontheless. Again, not sure why this bothers me.


(With apologies to Bowling for Soup)

This morning I woke up and remembered that I'd had a dream about someone I went to high school with. Occasionally I'll drop this person an email just to catch up with him. I searched the Intertubes using the Google(tm) search engine to see if the email I had for him was current, and discovered that he was on Facebook. So, I took a look at his profile.

I noticed that he had a bunch of folks from high school "friended". It was weird seeing a lot of these people that I haven't seen or spoken to in 15 years. Brought back a lot of memories. And it was cool....I could view one person's set of friends, look at one of their friends, and then look at their friends....you get the picture. It's a giant web so that eventually, I'm sure, I'd find everyone I graduated with. Or at least the ones that I graduated with.

So I asked to be friended to several folks....join a couple of groups. And I've since gotten friend requests from several other folks. Oddly enough, this seems really cool to me. Surprisingly, I've got a facebook account, myspace account, and several other social network accounts, but most of them lie dormant. I never actually thought to use facebook to find folks I went to school with. It just never occurred to me. I guess because I graduated with a group of people that didn't grow up with the internet -- it was just catching on as we were all in college. Which, I guess, would be a good reason they would be on facebook. I'm not quite sure why I'm so late to the game. My job is basically the internet. I'm pretty good at keeping up with technology. But for some reason, I never took the time to "groom" my social web sites. Maybe because it's too time consuming. I use twitter quite a bit, but basically that's nothing more than sending a message from my phone, along the lines of "sitting in Macy's, picking my nose while Wife tries on clothes". No grooming necessary. I'm a huge fan of instant messaging. Maybe I prefer these social interactions (can they really  be called that?) because they're instant.

Whatever the reason, I'm sucked in now. I'll probably addictively check my facebook account, hoping that I'm friended by someone else I went to school with. Today I got to chat with two people I haven't spoken with in a long time. It was nice to catch up with them. I hope I can do it some more.

I don't know if I've mentioned this in the past, but a lot of times i'm out, probably at work, and I think about something I have that I want to share in my blog. But, when I finally get a chance to sit down and do it, I don't. And so my blog goes for months with nothing new.

You'd think that with a new child I'd be constantly talking about all the wonderful things he's doing and how much we love him. And that's very much true....he's incredible and does a ton of wonderful things. I need to share more. Actually, more importantly, I need to share how he is truly is our miracle baby and evidence that God is faithful. That's a blog for another day.

So far, I rate this 5 stars out of 5. And the envy I get from all the other people on my floor at work makes it a total of 6 out of 5! 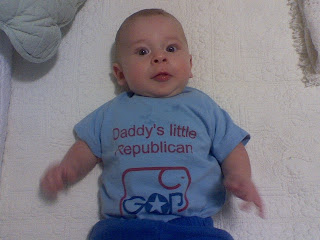 Neither Obama or McCain are my Hope and Change....

It's the political silly season, and the other day I was driving behind a car. On the back of the car there was a bumper sticker "Got Hope?". My reply? Yes, yes I do!

Now, those who know me know I'm a political junkie. I've been reading the political blogs and eating up everything I can about this election. I'm a strong believer in our system and enjoy the privilege of partaking in it. While there are days that I come home ranting and raving about what's going on and the idiocy that does go on in our government, in the end this is an enjoyable time for me.

But I need to make something clear...hopefully those who know me best know that before I affiliate myself with a political ideology or party, I identify my self with a Person -- Jesus Christ. Above all else, that is where my identity lies.

You see, my Hope doesn't lie in Barack Obama or John McCain....my Hope lies in Christ and Christ alone. Hope and Change! Because as I'm walking with my Lord, He's changing me each day to be more like Him!

Presidential candidates and presidents themselves make promises they can't keep...they pander to people to get their vote and give them what they want to hear. Christ, on the other hand, doesn't make promises He can't keep. He's faithful to His Word. He told us that He's the only way to God the Father. He's true to His Word and promises us we can have Life and Life more abundantly by following Him.

Don't get me wrong....I have a guy I'm rooting for in this race, and I pray he wins. But if he doesn't, I know that God is sovereign and He'll still be in control over all. Paul reminds us in Romans 13:1 "Everyone must submit to governing authorities. For all authority comes from God, and those in positions of authority have been placed there by God." So, if my guy loses, <shrug>. God's in control and it's all according to His Will. And, in reading Jeremiah, I'm reminded that the Judeans were exiled to Babylon, but God promised to take care of them and to bring them home.

There's no one here that can provide the Hope and Change I truly need. The One who can left this earth 2000 years ago. And, unlike anyone here, He's King for eternity. That's my Hope!
Posted by Brian at 10:58 AM No comments:

on the couch, listening to the rain

It's Tuesday night. I'm sitting on the couch, Wife sleeping beside me. I'm tapping this out using my nokia 770 and a software keyboard. I feel like following Wife and passing out.

I think I will. It's preferable to anything else at the moment....
Posted by Brian at 9:44 PM 2 comments: